US Navy forced to pay software company for hack

PVR: PNE AG: Correction of a version of 05/11/2022 according to article 40, section 1 of the WpHG [the German Securities Trading Act] with the objective of a distribution on a European scale

The ANC in Parliament is – once again – putting support for its president caught up in the scandal ahead of Parliament, the Constitution and the country.

This is the impact of maintaining an electoral system in which the party rules – and those elected to public office toe the line.

A comprehensive electoral review to include constituencies had been possible after the June 2020 Constitutional Court ruled that independents should participate in national and provincial elections. But the Electoral Amendment Bill before Parliament only makes narrow technical changes.

After all, constituency MPs have the power to rock the political party boat. Former British Prime Minister Boris Johnson experienced exactly that when Tory backbenchers rioted in late June after scandals ranging from costly renovations to breaches of Covid-19 lockdown rules that cost the party during by-elections.

For two days this week, the ANC in Parliament ensured that President Cyril Ramaphosa did not have to deal with the public debates of an ad hoc committee set up to examine the Phala Phala saga. In doing so, the ANC showed its tactical hand – separating Ramaphosa the politician from Ramaphosa the major shareholder in a company known as Phala Phala.

Diverting responsibility from the chairman to an amorphous shareholder base is strategically crucial not only in the short term but also in the medium and long term. The ANC knows that, without Ramaphosa as party chairman, the 2024 election could well turn into a massive vote haemorrhage, signaling the fourth consecutive drop in electoral support.

But, above all, Parliament’s commitment to respond to the findings of the State Capture Commission’s report on flaws in parliamentary oversight is in question – again.

In a repeat of opposition calls for inquiries into state capture claims, on Wednesday September 28, the ANC rejected the motion of the DA’s ad hoc committee to investigate the Phala Phala scandal” with specific reference to the involvement and response of various government departments and agencies in the alleged cover-up of the crime”.

Although the opposition was united, the ANC used its members in the Chamber, and two votes from the Good Party of Patricia de Lille, to defeat this motion by 199 votes against, 126 for.

As in the State Capture years, when debating this DA motion on Tuesday, September 27, the ANC argued that because law enforcement and other agencies were already investigating, Parliament should step back.

“It is important that we let the law take its course and that we respect the constitutional rights of the president,” said ANC MP and chairman of the defense committee Cyril Xaba, saying the provision of the Declaration of rights to equality before the law also applied to Ramaphosa.

Or as ANC MP and programming chief Mina Lesoma put it: “We can’t do this. We are not an organization where claims are tested.

This laissez-faire attitude to constitutional oversight is deaf, even defiant, to the State Capture Commission’s report on parliamentary oversight.

“To leave it exclusively to other agencies to investigate and, if necessary, take action on these allegations at this time, was not in line with Parliament’s constitutional responsibilities.”

After Tuesday’s parliamentary debate, DA chief whip Siviwe Gwarube, who sponsored the Phala Phala ad hoc committee motion, said the ANC “has been quick to explain that the forces of the order are doing their job while Parliament sits on its hands…”

After Wednesday’s vote, Gwarube didn’t mince words. “The ANC is beyond the point of self-correction. [It has] learned nothing from the last decade. In place [it continues] hollow out Parliament in order to protect many of them [its] ranks of responsibility…”

On Thursday, Ramaphosa changed tack, for the first time, to provide Parliament with some details. Previously, the position was to invoke “due process” and “advice and advice” to speak once all investigations have been completed.

“I said and admitted there was a theft at the farm and reported it to a general in SAPS… I deny there was any form of money laundering. I said… publicly [that] it was proceeds from the sale of the game…”

It echoes what the president said at the ANC conference in Limpopo in early June, just after the claims first emerged from former spy chief Arthur Fraser’s statement to police. “I am a farmer. I am in the livestock business. i’m in the game [farming] business… This was clearly a business transaction of selling animals…” Ramaphosa said at the time.

The hint of this business approach came during Tuesday’s parliamentary debate when the ANC separated Ramaphosa the individual and politician from Ramaphosa the businessman and shareholder.

“They will not distinguish between the legal personality of an entity whose chairman is a major shareholder and the chairman himself as an individual.”

While this line of defense seems like a nice political sleight of hand, it can still turn into a political pickle.

Along with a financial disclosure regime, the law and the code of ethics for members of the executive include stipulations prohibiting “exposing oneself to any situation involving the risk of conflict [of interest] between their official responsibilities and their private interests.

But during Thursday’s presidential Q&A, Ramaphosa reiterated that all interests had been disclosed, dismissed allegations of abuse of power or conflicts of interest and repeated promises to be held to account and cooperate with investigations. .

This week, the Hawks confirmed that investigations are still ongoing. The Office of the Québec Ombudsman indicated that the investigation was progressing well, without providing a time frame. The South African Reserve Bank (SARB), in an email response to questions about the status and timelines of the investigation, said: “The SARB does not comment on any exchange control investigation of individuals or ‘entities.’

With an ad hoc Phala Phala committee blackballed, the Parliamentary ANC has made a big deal of holding Ramaphosa accountable through the Article 89 impeachment inquiry based on an African Transformation Movement motion.

But an impeachment motion is a narrow constitutional process of impeachment for gross violation of the Constitution or law, gross misconduct, or incapacity.

This is a very different standard from a potentially far-reaching ad hoc public inquiry that could pose embarrassing questions to ministers and senior officials. Moreover, at this stage, the proceedings under Section 89 remain shielded from the public — the independent panel appointed to assess whether Ramaphosa has a case to answer will do its job on paper, not in public hearings.

However, the Independent Committee’s report and recommendations will be published in Committee Announcements, Tablings and Reports, the Proceedings of Parliament.

The ruling ANC and Ramaphosa, who has pledged to cooperate fully, can well hope that this independent panel, when it completes its work in 30 days, will dismiss the whole case.

If the panel finds there’s a case for the president to respond, it’s back to the political starting blocks for the ANC.

Although the Phala Phala scandal has a whole range of smoke and mirror games and peccadilloes, many don’t seem to point directly to Ramaphosa, even though he is known to spend a lot of time on the farm. However, a finding of exchange controls and tax violations would be devastating.

This may at least partly explain the ANC’s decision in Parliament to transfer responsibility for Ramaphosa.

This is, after all, what the ANC usually does for its leaders – especially the one already backed for a second term as party leader by six ANC provincial executives, with the exception of KwaZulu-Natal (although branch delegates can still show their own spirit).

When former President Thabo Mbeki publicly denounced HIV/AIDS denial, the ruling ANC remained silent. It took the Treatment Action Campaign to go to court to ensure HIV-positive mothers could get nevirapine for their babies when they were born. The Constitutional Court’s groundbreaking decision has led to policy change – and saved lives.

Ad hoc committees were used to absolve former President Jacob Zuma at the end of 2015 from reimbursement of public money for the cattle kraal, chicken coop, pool (fire), amphitheater and visitor center , as ordered by the Québec Ombudsman. In its founding judgment of March 2016, the Constitutional Court found that by doing this, the parliamentarians had acted “[inconsistently] with the Constitution”.

With less than three months to go before the 2022 ruling ANC elective conference and Ramaphosa endorsed for a second term – at least publicly – parliament is once again being pressed into action to limit the damage to mitigate the presidential scandal Phala Phala.

Against a backdrop of declining public confidence in political parties and institutions like Parliament, with no electoral or other fundamental change, history seems to be repeating itself. DM168

This story first appeared in our weekly newspaper Daily Maverick 168, which is available nationwide for R25. 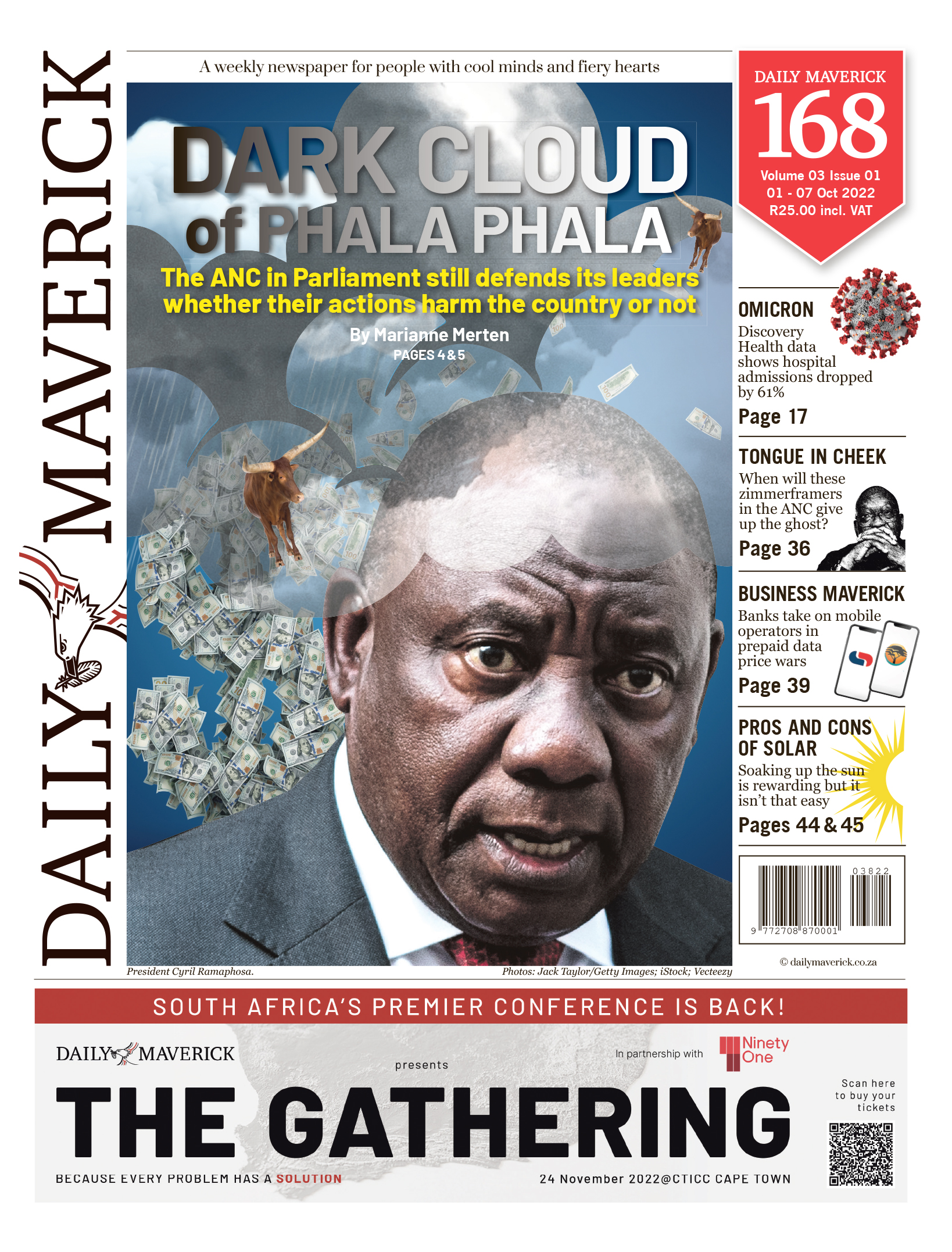 Previous Geopolitics becomes one of the main risks for mining and metals companies according to an EY survey
Next Recent Transactions (September 29, 2022) – Real Estate